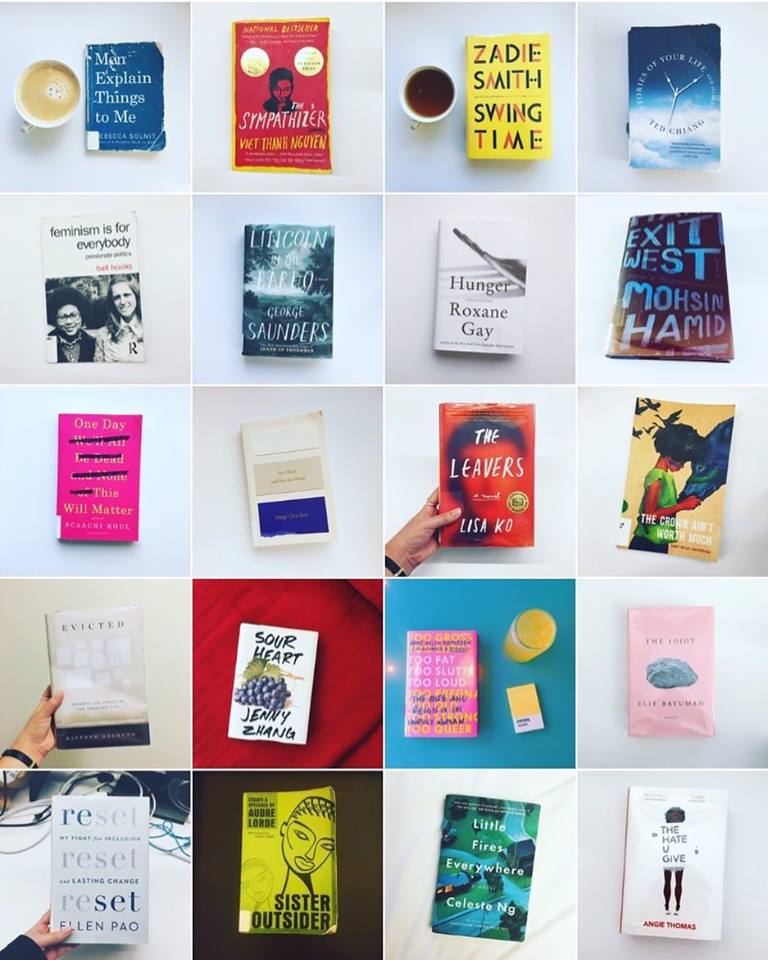 What I did differently this year

Last year, I made a conscious effort to document and diversify my reading with the help of a very intense book-tracking spreadsheet — and it worked! So I continued that trend this year, and read mostly books by women/people of color again. The final count ended up being 33 books by women, 23 of those written by women of color, and 21 books by men, 15 of those written by men of color (plus 2 books that were each coauthored by a man and a woman).

In response to a NYT tweet crowdsourcing “books by women authors,” I wrote my first tweetstorm about reading diversely and how it isn’t actually that hard to do some self-reflection, and more importantly, do the work of diversifying your literary environment. It was retweeted by awesome authors like Jodi Picoult, Jen Agg, and Doree Shafrir (whose book, Startup, I read this year), and I was able to write on the topic in a piece for the Columbia Journalism Review. Also, it was pretty cool to have the NYT social media team tweet back at me. ~Discourse~

Reading is usually a pretty solitary activity for me. Aside from the occasional social media update, I pretty much only chat regularly about the books I read with my boyfriend, who at this point knows that this is an evergreen topic for us to discuss (plus, he reads a lot too). However this year, I attended my first IRL book club (shoutout to Girls’ Night In) where we read Anne Helen Petersen’s essays Too Fat, Too Slutty, Too Loud: The Rise and Reign of the Unruly Woman. I also ran my first book club discussion for the Asian employee resource group I co-run at Vox Media, where we read Celeste Ng’s novel Little Fires Everywhere. It was fun to put my English minor to good use, and putting together book club discussion questions definitely made me pause, appreciate, and analyze Ng’s book more seriously — themes, motifs, key passages, character development, all that SparkNotes jazz.

It was also really great to see more people taking on the 52 Books Challenge themselves! Yay for reading alone together!

taking some inspiration from @nicolelzhu and doing my very own 52 books for 2018!
1/52 @minjinlee11’s pachinko
truly inspiring how even in a book set in 1900s japan, the strength and resilience of the women is apparent pic.twitter.com/KVwY5J68Hv

Breakdown of books I read:

Per my reading goals for 2017, I aimed to “assemble a library of resistance.” I read about how modern congress works (Act of Congress), intersectional feminism (bell hooks, Audre Lorde), race and racial justice (James Baldwin, Wesley Lowery, Jeff Chang), gender discrimination in the workplace (Ellen Pao’s memoir, Feminist Fight Club), and cities and housing (Evicted, The Death and Life of Great American Cities).

The best fiction I read this year also dealt with topics like police brutality (The Hate U Give), refugees and war (Viet Thanh Nguyen), race and relationships (Chemistry, Little Fires Everywhere, The Leavers), and immigration (Exit West) in incredible and nuanced ways.

Most of the books I read were between 200-400 pages long, and though I didn’t read anything longer than 500 pages, I read an additional 4 books, bringing my grand total to 56. I continue to be a dedicated (millennial!) patron of the New York Public Library, which is still my greatest hack for reading as much as I do. Almost all the books I read this year were borrowed from the library, though a select few were birthday gifts from my sister (Hunger, Sour Heart) or part of Strand event admission tickets (Chimamanda Ngozi Adichie, Rebecca Solnit).

How I track what I read

I tweet out a book when I finish it with the hashtag #52booksin52weeks. I use Coach.me and Goodreads to track day-to-day progress. I’ve started to compile all of my tweets/books into Twitter moments for better discoverability: 2014, 2015, 2016, 2017.

How I choose books to read

I’ve continued to add books to my to-read list on my book tracking spreadsheet, usually as soon as possible so that I can remember how I came across it. I still get most recommendations from friends, articles, newsletters, podcasts, authors I like/follow etc.

What I’m doing differently this year

I hope to continue reading diversely in terms of gender and race, but I also hope to read more books by LGBTQ authors, authors who are not from the US or UK, and perhaps even more translated works (or maybe finally attempting to read Harry Potter AKA 哈利波特 in Chinese?!?). Reading so quickly often means that I don’t retain as much about the books I read as I’d like. Though I probably won’t analyze every book as if I was putting together book club questions, I’d like to sit and think and share more of what I read this year. As I mentioned in last year’s blog post, per the NYPL, my ongoing goal is simply reading “consciously, thoughtfully, and outside my comfort zone.”

Oh, and although I’m still going to read a lot, I’m also going to try and write more fiction and creative nonfiction! Follow me on Twitter for updates on both!